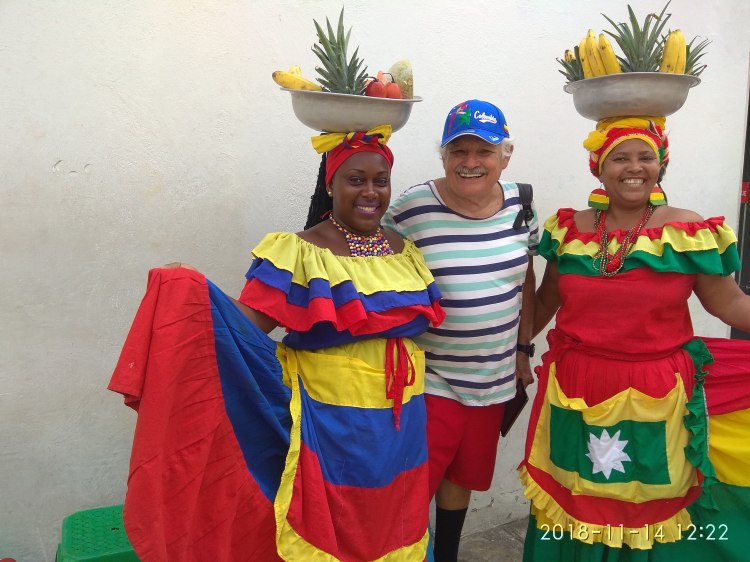 Jorge and I arrived in Cartegena two nights ago.

Because of the tropical climate, beautifully maintained Spanish-colonial arquitecture,  colorful gardens, delicious seafood, and a well-developed tourism infrastructure – Cartagena is one of the most popular destinations in Colombia – and indeed in all of South America.

After five days of wearing bulky cold-weather clothing, we happily slipped into our cooler cotton clothes, and soon felt the familiar sheen of sweat on our skin. I didn’t need a mirror to tell me that my bouncy Bogota hairstyle had wilted. I quickly put on my wide brimmed hat – a practical way to save time on hair maintenance – and avoid more sun damage to my skin.

A few minutes of walking around town made me wonder about other differences between this port city and the high-altitude capital of the country. I enjoyed visiting Bogota, but I often sensed tension there. I am used to a visibly-armed police presence, but the graffiti on almost every wall and the sullen student unrest made me feel uneasy.  In Cartagena, I notice that  most of the well-dressed patrons are Latinos or tourists – the servers are predominantly black.

A bit of historical background: In 1533, a Spanish conquistador named Pedro de Heredia took the village of Calamari by force, and founded the city of Cartagena. The “new city” was settled by the conquistadors, and in a relatively short time, it became one of the wealthiest ports in the Americas. One truth left out of the typical narrative for tourists is that this port’s biggest business was slave trade. The native population had been decimated by disease, and a new source of cheap labour was needed. It is estimated that over one million Africans were shipped to Cartagena.

Cartagena was also a major port for shipping the gold that was looted from the Inca Empire and that of the local indigenous Zenú people of the coast. The city was often filled with gold and precious stones and it quickly became a target for pirates in search of booty. The Spanish rulers built an 11 kilometer-long wall that managed to withstand most of the attacks, and in fact Cartagena was never completely under siege as was the case in other wealthy Spanish-American ports.

The British also attacked the city several times in an effort to take it from Spain, yet another painful and bloody episode in the history of colonization. Cartagena declared its independence from Spain in 1811, one of the first cities in Colombia to do so. Finally, in 1821, Simón Bolivar entered the city from the sea and re-named it – La Heroica – the Heroic City.

During this whole time, slavery continued, but many slaves escaped to create free villages, called palenques. In these communities, they could celebrate their African roots and culture. In 1851, Colombia abolished slavery, 14 years before the United States. The only surviving palenque is San Basilio de Palenque. It was the first free city in America dating its foundation to 1713. To this day, the people there speak a unique language, Palenquero, a combination of Spanish and languages from West Central Africa.

Walking along the fortified walls – touring San Felipe, a hill-top castle built by the Spanish – or visiting the Palace of the Inquisition are reminders of the contradicting perspectives and cultures, and Cartagena’s inequality.

Above all others, one sight caused me to contemplate the different “worlds” of Cartegena. I noticed many black women dressed in colourful Colombian dresses, selling fruit and posing for photos.

Did Jorge and I take pictures of these women? Yes – after being asked to do so by many of them – we did. The photo at the top of the post shows two of them modeling their splendid outfits. I suppose they feel that their work is easier than a lot of other jobs, but I felt uncomfortable holding up my phone for the quick photo shoot.  But as always, Jorge was complimentary and generous, bringing out genuine smiles and thanks from both. He can relate to everyone and I am grateful to be making this trip with him.

And we did spend money on another purchase – if you guessed that we bought something “green” – you guessed right. This is my new silver pinky ring – designed by a Columbian jeweller who told me he had lived for several years in Canada. 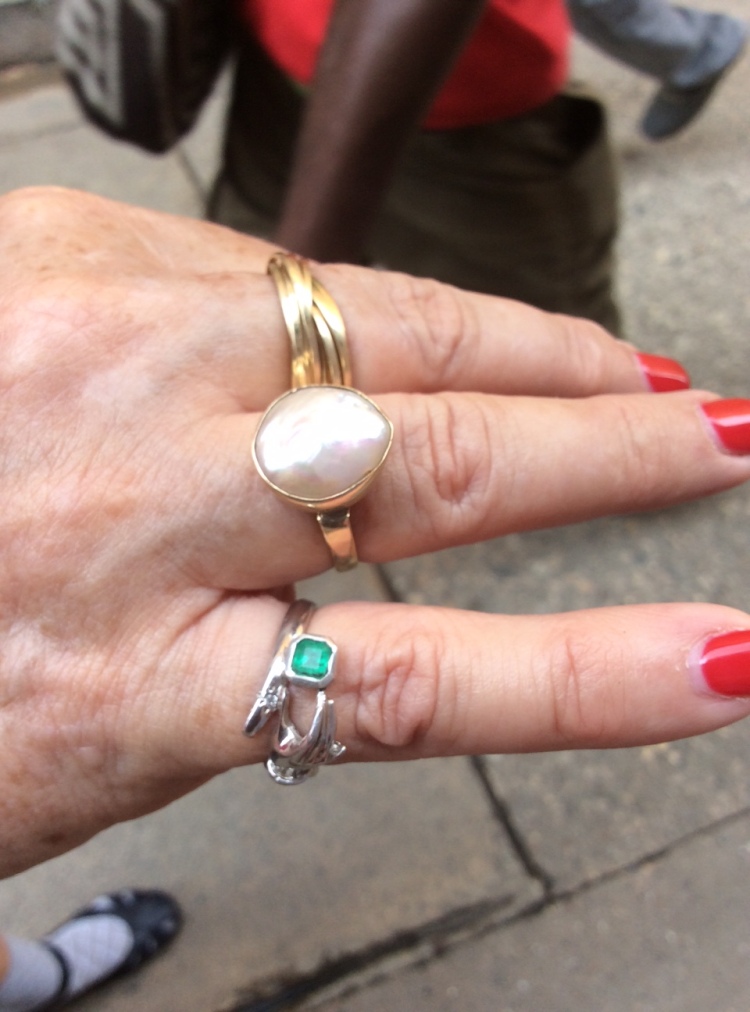 So yes indeed, cultural melding of many kinds are found in Cartagena.

Published by Changes in our Lives

I am originally from Canada but have lived in Mexico since 1976. My husband is from Merida, Yucatan and we raised our family here. We both worked for many years at Tecnologia Turistica Total (TTT), the tourism, language and multimedia college we founded for local and international students. Now retired, we enjoy spending time with family and friends, My other interests include spending time with freinds, reading, painting, cooking and travel. View more posts

This site uses Akismet to reduce spam. Learn how your comment data is processed.